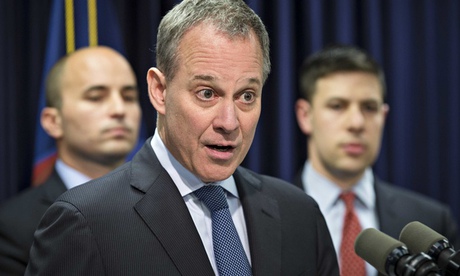 Damning allegations that Barclays cheated and defrauded its customers pushed shares in the besieged bank to their lowest levels in 18 months on Thursday and set back attempts by its boss Antony Jenkins to turn around its troubled reputation.

The fall was prompted by a lawsuit filed overnight by the New York attorney general, Eric Schneiderman. He accused Barclays of “a systematic pattern of fraud and deceit” over the way it operated its “dark pool” private trading system.

Schneiderman said the dark pool – a means by which traders can remain anonymous until they have completed trades and which was publicised in a recent book on Wall Street by Michael Lewis – was used to favour high-frequency traders, contrary to promises made in marketing literature.

“Barclays grew its dark pool by telling investors they were diving into safe waters. According to the lawsuit, Barclays’ dark pool was full of predators – there at Barclays’ invitation,” Schneiderman said.

High-frequency traders use complex computer systems to buy and sell huge volumes of stocks in milliseconds to profit from tiny movements in share prices.

Barclays’ new legal counsel, Bob Hoyt – who worked in George W Bush’s White House – was in New York to lead an urgent inquiry into the allegations, which come as Jenkins has been pledging to clean up Barclays. The allegations date from 2011 until the present, so include the time Jenkins has been in charge. He was promoted to running the bank in the wake of the Libor-rigging scandal which forced out Bob Diamond and other top executives.

Jenkins emailed staff – many of whom have been sent on ethics and cultural training – to tell them he would not tolerate any abuse of customers. “I have … always made it clear that cultural change will take time, but it is precisely incidents such as this which drive home the urgent necessity of the programme we have embarked on to transform the values and conduct of this business. I will not tolerate any circumstances in which our clients are lied to or misled and any instances I discover will be dealt with severely,” he said.

Jenkins said he felt “deep disappointment and frustration” about the latest allegations.

The bank refused to say if anyone had been suspended as a result of the attorney general’s lawsuit, but in a statement “noted” the allegations about Barclays’ dark pool. These opaque trading platforms are operated by a number of banks. Barclays’ is called LX Liquidity Cross and has been operating for four years.

“Amongst other relief, the complaint seeks unspecified monetary damages and injunctive relief,” Barclays said. “Barclays will update the market, if appropriate, in due course.”

Bloomberg reported that customers were refusing to deal in the Barclays’ dark pool since the allegations.

Sandy Chen, banking analyst at Cenkos, believes the US authorities may be considering injunctions on dark pool trading – and suggested that Barclays’ banking licence in New York could be suspended.

“Barclays’ response noted that the complaint seeks ‘injunctive relief’– which we think signals that the New York attorney general and Barclays are already debating whether injunctions on dark pool trading should be imposed,” Chen said.

In echoes of the emails and electronic chats provided at the time of Barclays’ £290m fine for rigging Libor, the attorney general cited alleged conversations between staff. “Happy to take liberties if can all agree,” one is quoted as saying. Schneiderman alleges that Barclays was trying make its dark pool the biggest in the US.

The allegations are being made at a time when other European banks are facing action from US regulators – notably BNP Paribas – and when Barclays is also fighting allegations by City regulator the Financial Conduct Authority that it behaved “recklessly” during a 2008 fundraising.

The New York attorney general had been looking at dark pools before the publication of Lewis’s book – Flash Boys: A Wall Street Revolt – which shows how professional investors could trade more quickly to make profits. On CNBC, Schneiderman would not comment on whether others were being investigated but said “the conduct here is so egregious and ongoing we felt we had to move on this”.

Barclays shares were hit because of the uncertainty about the financial penalties that may be imposed if the allegations are proved and because of the potential impact on its investment banking division. While Jenkinsis scaling back the investment bank as part of 19,000 job cutsannounced in May, he had intended to keep the equities division in which the dark pool business operates.

Universal Basic Income – an idea boosted by the pandemic?

In its “From Virus to Vitamin” Newsletter, the organizers raise a key question every month, and consult with a number of people in different countries, myself included, presenting an overview of technically informed opinions.
Instagram @ladislaudowbor