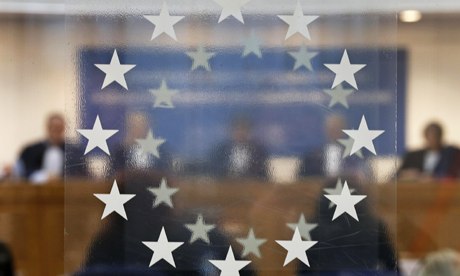 Judges of the European court of human rights during a hearing at the court in Strasbourg on Tuesday. Photograph: Vincent Kessler/Reuters

Lawyers for two men subject to extraordinary rendition by the CIA told the European court of human rights (ECHR) on Tuesday that Poland, which permitted a secret “black” site to operate on its territory, should be held responsible for their torture.

The two day hearing at Strasbourg was the first time a European country has been taken to court for allowing American agencies to carry out “enhanced” interrogation and “waterboarding” programmes. In a highly unusual legal move, the media and public were barred from the opening day’s session.

The military base at Stare Kiejkuty, north of Warsaw, it was revealed, had previously been used by German intelligence and later the Soviet army during the Second World War. One of the men, it was alleged, was subjected to mock executions while hooded and otherwise naked.

Abd al-Rahim Hussayn Muhammad al-Nashiri, a Saudi Arabian national of Yemeni descent, and Zayn al-Abidin Muhammad Husayn, also known as Abu Zubaydah, a stateless Palestinian, maintain they were waterboarded and abused during interrogation in Poland. Both men are being held by the US in Guantánamo Bay, Cuba.

The court also heard a submission from Ben Emmerson QC, the UN special rapporteur on counter-terrorism, who argued that where gross or “systematic human rights violations are alleged to have occurred, the right to know the truth is not only an individual right that belongs to the immediate victim of the violation, but also a collective right that belongs to the whole of society”.

Husayn, born in 1971, was considered by the US authorities to be an important member of al-Qaida and is alleged to have been involved in planning the September 11 attacks on New York and Washington.

They claim that after being captured by the CIA they were transferred on the same “rendition” plane in December 2002 to a secret detention site in Poland, with the knowledge of the Polish authorities, for the purpose of interrogation and were tortured.

Nashiri maintains he was seized in Dubai in October that year and subsequently moved around secret CIA detention facilities in Afghanistan and Thailand before being taken to Poland. He remained in a secret detention centre until early June 2003, when he was secretly transferred, with the assistance of the Polish authorities, to Morocco and then, in September 2003, to the US naval base in Guantánamo Bay.

He claims he was subjected to the so-called “waterboard technique”, where a detainee is tied to a bench with his feet elevated above his head, a cloth placed over his mouth and nose and water poured on to the cloth producing the sensation of drowning and suffocation.

Nashiri alleges he was also forced into prolonged stress positions – kneeling on the floor and leaning back – and was threatened that his family would be abused if he did not provide information.

Amrit Singh, of the Open Society Justice Initiative who represented Nashiri, said that his client had been repeatedly tortured. “The court heard expert testimony [on Monday] confirming how Polish officials filed false flight plans and assisted in the cover-up of CIA operations,” Singh said. “In a secluded villa, hidden from sight, CIA interrogators subjected him to torture: to mock executions while he stood naked and hooded before them; to painful stress positions that nearly dislocated his arms from his shoulders; and to threats of bringing in his mother to sexually abuse her in front of him.” He now faces the death penalty before a US military commission, she added.

According to his submissions, Husayn was waterboarded, placed in a box and exposed to extreme noise.

Communication with his lawyers is restricted, making it impossible to pass on information or evidence directly from him to the ECHR. The presentation of his case is principally based on publicly available sources.

Pádraig Hughes, a lawyer with Interights who presented Husayn, said before the hearing: “We hope that the court’s ruling will make it clear that the actions by the Polish authorities were a clear violation of human rights and should never be repeated by any country that properly respects human rights and the rule of law.”

Crofton Black, a researcher with the London-based human rights organisation Reprieve, who has been researching the issue of secret prisons in Europe during the ‘War on Terror’ sat in on the first, closed day of the hearing.

“We have now heard overwhelming and uncontested evidence that the CIA was running a secret torture prison on Polish soil, with the Polish Government’s knowledge,” he said. “Despite being given many opportunities to do so, the Polish Government has failed to contest that it knew prisoners were being held beyond the rule of law and tortured by the CIA inside their own country.

“It has also become clear that the Polish government’s investigation into the issue was in reality nothing more than a smoke-screen, which was neither designed nor intended to get to the truth.

A Polish offical told the court that his country was the only European state that was “conducting a real investigation” and that the inquiry had been hindered by the fact that it was difficult for the prosecutor to talk to the complainants. Relations between Poland and the US, he added, were subject to secrecy.

Romania and Lithuania also have cases pending at the ECHR for hosting secret CIA prisons. Judgment was reserved.

Universal Basic Income – an idea boosted by the pandemic?

In its “From Virus to Vitamin” Newsletter, the organizers raise a key question every month, and consult with a number of people in different countries, myself included, presenting an overview of technically informed opinions.
Instagram @ladislaudowbor